Although the iPad is a fantastic piece of technology, it is much like the iPhone in the way that it only allows you to run one app at a time. For example, it isn’t possible to browse the web while you are writing an email. To a lot of iPad users this is a huge drawback for the product, but don’t worry, there is now a solution. This comes in the form of an app called Desktop which has been created by Aqua Eagle. But does it really do what it claims?

The simple answer is yes, the app allows you to run any two of the apps that on your iPad at the same time. However, it does only allow a certain amount of apps, so you will not be able to play the latest game you have just downloaded whilst browsed the web, for example.  The app works by splitting the screen, the app then puts each one of the apps you are running on each side of the screen, much like a desktop computer. This allows you to multitask, a feature that is yet to be seen on the iPhone or iPad operating system. 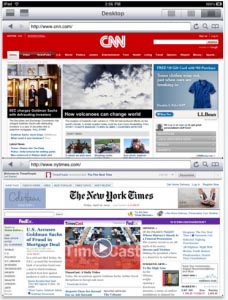 The app is extremely simple to use. When using the split screen, you choose how the screen is split; you can choose either to have an app at the top and bottom of the screen or to have an app to the left and right of the screen, depending on whether or not you opt for portrait or landscape mode. Although currently the app is limited to being able to run only the basic apps, such as Browser, Calculator, Currency Converter, Dictionary, E-mail composer, Maps, Weather, and a few others, it is still very useful. The app is also very intuitive and does most of the work for you, the user will never have to worry about resizing, moving, or maximizing the windows as the app takes care of this for you by itself. Until Apple brings in the next OS 4 update for the iPad, this is the closest we have to a complete multitasking system.

Overall, this is a brilliant and extremely useful app. There have been countless times where I have just wanted to check my email without exiting my current application or search for a song without quitting the app I’m currently using. The app is very easy to use and the developers also state that there are new modules coming in the next update, which will expand the variety of apps that you can use with the device. The app is very modestly priced in the app store so we highly recommended the purchase of it if you have a few dollars to spare.