There is no doubt that the iPad has completely revolutionized the way that a lot of people work and enjoy games on mobile devices, but there is also a couple of major drawbacks to the device. One of the problems that people actually face when it comes to the iPad is that they are unable to play flash content on the device. This can be a big problem as there is a lot of flash content available on the internet including many games and advertisements on websites. Until recently, there was no way of viewing the flash content on the device until the SkyFire iPad app came along and made it all possible.

When you launch the application for the first time, you will notice that it looks pretty similar to any other web browser out there for the iPad. A lot of people think that it looks quite similar to Firefox with the color scheme and we look at this as an added bonus. The app looks pretty simple then, but it is packed full of features that will make browsing the web on the iPad device much better than it has ever been before.

One of the best features of SkyFire is of course that it allows you to play flash content on the device. It does this by converting the content into a format that the iPad can view and it does this well. The application works with almost all flash media although it will not work with flash games or flash apps. Everything else works fine and the app will let you choose whether or not you would actually like to view the content.

As well as this fantastic feature, the application also allows you to be able to be social on the iPad. There is actually a toolbar at the bottom of the browser that will allow you to share things on social networking websites such as Facebook and Twitter. This built-in functionality really makes the application appeal to a lot of users and really makes a lot of social things on the iPad a lot simpler. You can also share things you find over a variety of other services including GReader as well as Instapaper and many more.

Overall, this is a fantastic application that really allows you to view the flash content as well as having many other great features. The app is available from the iTunes app store for just $4.99.

One of the things that you might notice about the iPad is that whilst the screen is extremely large and makes reading things extremely easy, you still might not be able to be bothered to read a lot of things. The iPad has a lot going for it, it has many things that app developers can use to their advantage and one of the iPad apps that takes a couple of these things is the Speak It! Text to Speech app for the iPad. The idea of this application is that it will read things aloud to you on your iPad so you don’t have to.

The first thing we will look at is the design of this app and we think that the design is pretty good. When you launch the app for the first time you will probably notice this also and whilst the design is pretty good, it is also pretty simple. This app doesn’t have much design really like the idea of the app is to offer more functionality than design. However, the small amount of design that has been done is certainly fine and the app is laid out well enough for almost anyone to understand it. The app has many features, all of which are designed to make your life even easier than never before and it uses the built-in speaker of the iPad and the headphones feature to allow the app to read things to you. 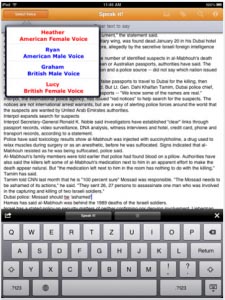 One of the best features of the app is that you can actually copy and paste text from almost any other app on the iPad device into the Speak It! Text to Speech application, all you have to do in order to do this is to actually copy some text, launch the Speak It! Text to Speech app and then paste it. After this, you can make use of a variety of other features and have the text read out loud to you. The other great feature that we have noticed with the app is that you can actually have the text read to you in four different voices. The app has four voices loaded into it, two of them are British voices and two of them are American. There is one male voice and one female voice for each region and this means that you will really be able to have the text read to you in an accent that is easy to understand for yourself. The fact that the developers have thought of this is great. Another quite useful feature is that you can actually save audio files that the app creates so that you can listen to them later.

Overall, this is a fantastic app and it claims to offer the best text to speech services of any app for the iPad and given the testing, we have done with the app; we believe it. This app is available for just $1.99 from the app store and for that price you really do get a lot for your money.